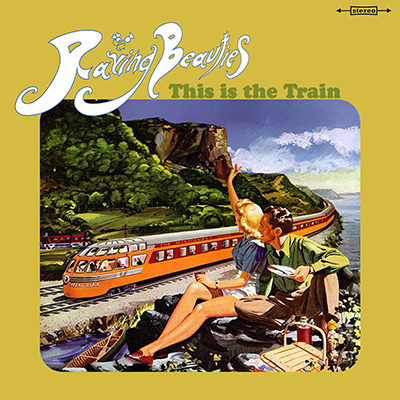 Brighton-based, jangle-pop collective Raving Beauties are back with a brilliant new single, This is the Train – an optimistic and summery song, with a hint of Northern Soul. It features special guest, James Walbourne (The Pretenders, The Rails), on twangy lead guitar, and was mixed by the Go!Team’s Ian Parton, who also plays organ, bass and glockenspiel on the track.

This is the Train is a taster from the group’s brand new album, Over Yonder, which is out next year. Raving Beauties started out in 2015, as a mysterious fictional band inspired by a short story written by frontman, Belfast-born Brian Bell. In an exclusive interview, he tells us all about the new single, so jump on board…

How’s it going? How’s your summer been?

Brian Bell: Well there are a lot worse places to be than Brighton in the summer, especially as it gradually becomes more like its old self, with things opening up again. A big thing for me has been a conversion to sea-swimming and most days I can be found splashing around in the English Channel around sunrise. I love it!

Tell us about your great new single, This is the Train. It’s a bit of a different sound for the band, isn’t it? It’s twangy, rather than jangly, and has a slight Northern Soul feel. Where did the song come from? It was written with band member and multi-instrumentalist, Tom Collison, wasn’t it?

BB: One of the main influences on the album we’re gradually putting the finishing touches to – Over Yonder – is the early ‘70s Island Records vibe, and at one point we’d been thinking about covering a John Martyn or Nick Drake song in a more up-tempo. jangly style. We ended up binning that idea, but This is the Train emerged from me putting a new vocal melody and lyrics to some of the folky chord progressions that Tom had been playing around with during that process.

I love Motown and Northern Soul, so maybe it was a subliminal influence, but I think Ian Parton’s work on the mix, which involved him re-doing the bass to make it more punchy, adding glockenspiel and organ, and doing a lot of work on the individual drum sounds, probably influenced that feel a lot.

It’s an optimistic and summery song, isn’t it? It came out in early September, so are you hoping for an Indian summer, so it can be the soundtrack?

BB: Yeah – an Indian summer would definitely suit the track nicely, but this time of year is often associated with new beginnings too, and I’ve been thinking about that Dylan quote from the Scorsese No Direction Home documentary, when he says “always be in a constant state of becoming”. It would be lovely if the song evokes that kind of feeling in people.

‘Having James Walbourne play on your single is a bit like Messi being in your five-aside team for a kickaround in the park!’

There’s a special guest on lead guitar, James Walbourne (The Pretenders, The Rails), and the organ, bass and glockenspiel are by Ian Parton (The Go! Team), who also mixed the track. How did those guys get involved?

BB: Back in the spring, myself and Tom had finally got around to doing more work on the album in his home studio in Homerton, and during that time I’d arranged to meet up with James for a coffee while I was in the area. When I mentioned the Beauties recordings, he offered to play on something, which was exciting when you consider what a phenomenal guitarist he is. Sorry for the football analogy, but it’s a bit like Messi offering to be in your five-a-side team for a kickaround in the park!

Anyway, we sent him over a rough mix of This is the Train to add a lead guitar part to. When we heard what he’d contributed, we were beyond delighted.

As for Ian’s involvement, it’s been frustrating how much the pandemic has slowed down progress on the album, but I felt that if we could at least get a single mixed and out there, that would feel pretty satisfying. I’d set my heart on that, but the major snag was that by that stage, Tom had dismantled his studio and was in the midst of the huge upheaval of him and his partner upping sticks from London to their new home in Dumfries.

I know Ian through Bosie Vincent – a film-maker who made the video for the single – and we’re pretty friendly, so in the ‘if you don’t ask you don’t get’ spirit, I thought I’d see if he was up for helping out and luckily he was.

Tell us about the promo video. It’s cool – a bit summery and psych, with trains…

BB: As well as being one of my dearest pals, Bosie Vincent is very much part of the Beauties collective, having made all our other videos. For this one, he mixed up cool archive footage with footage that he got of a bunch of us having a sing-song to the tune around a campfire on Brighton beach. As he’s next-door neighbours with Ian, it was also pretty easy to get some nice close-ups of him bashing a customised Beauties tambourine in time to the tune! When I saw the finished video, I was so chuffed with it. I think he’s captured the feel of the song perfectly with those visuals.

The band line-up has changed since we last spoke. Scottish folknik and acoustic guitar maestro, Callum Johnstone, has joined. How did that come about?

BB: It sounds like something out of our ‘fictional band’ past but it’s actually true. We met at a Transcendental Meditation weekend and when we got chatting, it emerged that he was really into the Bert Jansch/Davy Graham school of finger-style acoustic guitar playing, which I was really keen to incorporate into the new album. When he checked out some of the previous Beauties stuff, he was impressed enough that he was keen to get on board. Let’s just say I ended up ditching the Maharishi but kept Callum! 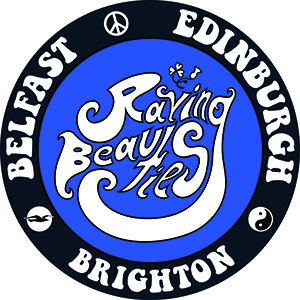 It’s a nice bit of serendipity in that the original Raving Beauties album was a Belfast-Edinburgh alliance, with singer/songwriter Gordon Grahame, which has now neatly been re-established, as Callum is a proud Edinburgher. If you look closely at the Beauties logo, there’s a Shamrock and Thistle entwined, so I’m really glad to keep that Scots-Irish aspect alive.

Completing the new line-up is drummer Grant Allardyce. What’s his story and how does he fit in? Isn’t he a jazzer?

BB: Grant is another exiled Belfast boy on the local music scene and I’ve known him for donkey’s years. He plays with a fantastic alt-country folk band called the Mountain Firework Company, but he’s primarily a jazzer and is part of a jazz trio called the Lost Organ Unit. It was a massive influence on Grant’s style that he was originally tutored by a guy called Keith Copeland, who was renowned on the New York jazz scene. I wanted a looser, jazzier feel to the album, which is why I got him involved, and Tom came down to a wee studio in Lewes a while back to record all Grant’s drums.

‘We’re tantalisingly close to finishing the new record, but a 2022 release is looking more likely. We’re aiming for it to be just as melodic as the previous records, but with more of a loose, early ’70s vibe’

How’s the new album coming along?

BB: We’re still working on it, and aiming to reconvene at Tom’s new place in Scotland in the autumn, if we can fit that in with his other commitments, as he’s very much in demand as a gigging multi-instrumentalist.

I think we’re tantalisingly close to finishing the record, but a 2022 release is looking more likely now. Sound-wise, we’re aiming for it to be just as melodic as the previous records, but with more of a loose, early ’70s vibe, with lots of instrumental segues provided by Callum, who’s become such an invaluable asset to the project.

I’ve put together a Spotify playlist that’s full of the type of stuff that’s influenced the record:

On that note,  what music – new and old – are you currently enjoying?

BB: I love Fleet Foxes’ Shore –  it’s been a constant since it came out this time last year. I think Robin Pecknold is an incredible talent. Other than that, I’ve been on a bit of a John Fahey tip lately. There’s something about his playing that really gets under your skin. His Days Have Gone By album is a big favourite.

In recent times I think we’ve needed music to lift us and if ever there’s a tune that does that, it’s Pastor T.L. Barrett and the Youth for Christ Choir, Like a Ship (Without a Sail), which you hear quite often popping up on 6 Music – what a belter!

Finally, when was the last time you took a train and what was it like?

BB: We went on a trip to Hastings a few weeks ago – there are some very nice Sussex Downs views and coastal scenery on that line. Also, when I get there, I always make a wee pilgrimage to John Martyn’s old gaff on Cobourg Place and imagine Nick Drake striding up those steep steps to West Hill, which he’d have done many times when he came down to visit John and Beverley.

This is the Train by Raving Beauties is out now as a digital-only single on Clubhouse Records.