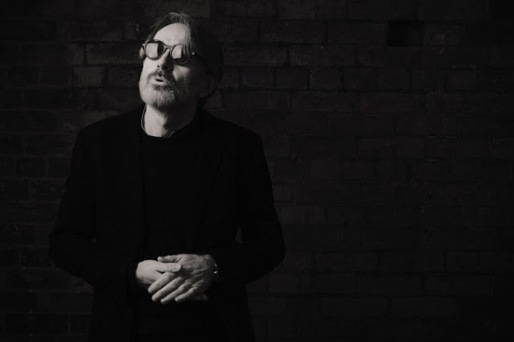 Vinny Peculiar is doing it while he still can… The West Midlands-based singer-songwriter’s new album – While You Still Can – is a socio-political record that takes a wry look at the current state of the UK, but also throws in some references to ’70s pop culture along the way.

We spoke to him about Brexit, the good and bad sides of social networking, heavy rock and channelling Gang of Four, Wishbone Ash and Pink Floyd…

Diane Abbott taking a selfie, broadcaster Richard Stilgoe, ’70s rock, class A drugs as a form of social control, Donny and Marie Osmond and a chain mail bikini… welcome to the weird world of Vinny Peculiar.

All of these subjects are mentioned on While You Still Can, the new album by the cult singer-songwriter, which is his thirteenth in a 20-year career.

The last time we spoke to Vinny, he’d just recorded Return of the Native, his brilliant 2018 album about moving from Manchester and returning to Worcestershire, where he grew up. This time around, he’s made a harder, darker and rockier record with a political edge and plenty of social commentary, but he hasn’t dispatched with the vintage pop culture references that we know – and love – him for.

Man Out Of Time is rollicking country-blues with a lyric about the ’70s glam rock years of his youth, while Culture Vulture’s Led Zep-inspired riffs are a nod to his Black Country rock roots. The synth-heavy Ministry Of Fate concerns itself with government media blackouts, Scarecrows is Bowie-esque, robotic funk meets plastic soul and the post-punk, heavy indie-rock of Pop Music For Ugly People tackles political opportunism and personal greed.

With atmospheric, ghostly piano and minimalist, spidery guitar, the opening song, Vote For Me, is a mysterious and sinister plea, and Question Time – our favourite track – is a Smiths-like, jangly pop song, but with a lyric about a missing female politician, told from the point of view of a suspect under interrogation.

With that in mind, we subjected Vinny to an interrogation to find out more about his new album and get his views on the state of the nation.

“I’m not used to making political-type proclamations – I just want to sell records!” he tells us. “How flippant am I?”

I like the title of the new album. Where did it come from?

Vinny Peculiar: It came from something my dad often said to me: ‘Do something useful while you still can…’

That was the original title, but I shortened it to While You Still Can, after a conversation with Paul Cliff, who designed the sleeve of the record. It seemed appropriate, given the volatile times we live in, politics fragmenting, constitutions crumbling, the climate changing, and the need to act while we still can… 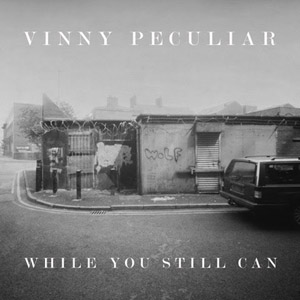 On that note, the album is quite political at times – there are several social commentary songs on there: Vote For Me, Pop Music For Ugly People, Culture Vulture, Let Them Take Drugs, Ministry of Fate, Diane Abbott Takes A Selfie, Question Time, Art and Poverty…  Did you set out to make a political album, or did it happen by accident?

VP: It’s impossible to avoid politics nowadays – things are so polarised, opinions so righteous, news feeds ever omnipresent… This album is a reaction, in parts, to all that and from speaking to people on the sharp end of this Government’s austerity programme – teachers, nurses and shop workers. These are torrid times.

The Tories have so much to answer for and, with the Brexit divide, everything is so aggressively polarised all the time, hence the socio-political side to this record. That said I don’t have all the answers, but listening a bit harder and shouting a little less would be a start. We need to be nicer to each other, and we need to get rid of the Tories, obviously…

Staying with politics, Question Time – my favourite song on the album – is classic Vinny Peculiar jangle-pop. The guitars are very Johnny Marr-esque, but, beneath the pop tune, there’s something more sinister going on…. a female MP is missing and her suspected abductor is being interrogated. We hear the song from his point of view…

VP: There’s an ambiguity in the song – it’s not clear exactly what’s happened to her. Perhaps she’s has been trolled and has gone underground, or perhaps something more sinister is going on… So many of my songs have a linear story, with a beginning, middle and an end, but Question Time asks more questions than it answers – a bit like the TV show…

With the current state of the UK, it must be a great time to be an observational singer-songwriter. Where do you start? Is it overwhelming?

VP: The songwriter’s radar does seem to be a little more vivid just now – yes. The sense of uncertainty, Trump – I mean, where do you start? We are living in a great big unknown and it feels like we’re being stitched up. It’s crazy, isn’t it? The Brexit thing, all the pseudo-nationalism, immigration scaremongering, families at war – these are divisive times.

We need a more empathic way of listening to each other. I’d support bringing politics back to a more local, accessible, decision-making level, with less screaming, confrontational opinions on Twitter and more jovial meetings in the community centre.

There’s a song on the new album called Diane Abbott Takes A Selfie. Are you a fan of social media? Is it a necessary evil?

VP: Like most musicians, I use social media to communicate new releases, point people in my direction, share interests and such – it can be a useful tool. On the other hand, it can be incredibly damaging, dangerous and destructive.

The hate speak, the trolls – just block ‘em – the rise in teenage suicides that’s being driven by cyber bullies and the dubious data targeting to fix elections… It’s addictive by design and I’m as guilty as the next person of spending way too long scrolling through my feed… There are digital-free communities emerging in Northern California, which is, er, interesting…

‘We need to be nicer to each other, and we need to get rid of the Tories, obviously…’

Your last record, Return of the Native, was a concept album about returning to live in Worcestershire, where you grew up. The new album has some Black Country rock on it – the West Midlands influence is still creeping through. Culture Vulture has a Led Zeppelin feel. Have you been getting in touch with your ’70s rock roots?

VP: I wanted this new record to be louder and prouder, with more of a band feel. The songs felt like band songs, even during the writing stage, and there are hardly any acoustic guitars on the record. It’s all rather riff-centric, with a few old school guitar solos – the kind of which I would have enjoyed as a teenager. They’re a bit flash – hah! One of the producers, Dave Draper, knows all about rock and the Midlands’ heavy metal legacy – his input was crucial in shaping the direction of the songs, as we turned up to 11.

Speaking of iconic Midlanders, I can recommend the Black Sabbath exhibition in Birmingham – it’s a beautifully put together show.

How were the recording sessions for the album? You worked with your ex-Parlour Flames rhythm section Che Beresford (drums) and Ollie Collins (bass) and two producers, Dave Draper and David Marsden, both whom you’ve worked with before. Was it an easy album to make?

VP: The Parlour Flames rhythm section reunion was fun. We rehearsed the songs as a three-piece band a couple of times and recorded bass and drums in Manchester – the rest of the album was recorded in my home studio. It was a relatively easy album to make, but they are never that easy – there is always something that doesn’t quite go to plan.

I’d hoped to have a more inclusive band involvement in the mixing/production, but it proved impossible with distance, time and work constraints. So, the bulk of the album was produced here in the Midlands by Dave Draper, who did Return of the Native, but three tracks were produced in Southport by David Marsden, who worked on my album Silver Meadows.

‘I wanted this new record to be louder and prouder – it’s all rather riff-centric, with a few old school guitar solos’

I should also add that the artwork for the album is by long-term Vinny Peculiar collaborator Paul Cliff. The images he used are pinhole photographs highlighting the former homes of World War 1 soldiers from Bury, Lancashire.

What were some of your other musical influences and starting points for the new record? As well as ‘70s rock, there’s synth pop (Ministry of Fate) and Bowie-esque funk / plastic soul (Scarecrows) in the mix, too. It’s an eclectic album…

VP: Gang of Four – I’m channelling my inner Andy Gill on a couple of the tracks – white noise and scratches – and my inner Andy Powell, from my teenage favourites Wishbone Ash – hard rock riffs and feedback. Oh and my inner Dave Gilmour on Let Them Take Drugs – he is such a feel-good player…

Man Out Of Time is a country-rock-blues song that is littered with ’70s references: Elvis, The Spiders From Mars, Queen, The Osmonds, Noggin The Nog, Richard Stilgoe… Do you feel like a man out of time?

VP: Hah! Yes – kind of. I think we all have our chosen musical era in pop music that’s defined by age. It was the excitement of the new music of my youth – glam rock, heartbreak, pop and TV culture – these are the inspirational forces at play here. The song is set in 1972 and is slightly at odds with the rest of the album. It ends in 1976, with the dawn of punk rock… 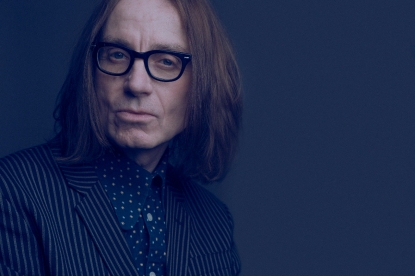 You’re very prolific. What are your plans for the rest of 2019 and 2020? Any new projects and albums in the pipeline?

VP: I’m hoping we can do a string of band gigs in March 2020, as well as continuing with the solo shows, and we have a band album launch gig at The Castle, in Manchester, on November 28.

I’m currently remixing some older tracks for a rarities album that I’ll put out some time next year, hopefully. I have an acoustic project I hope to finish, but, in truth, it’s only three songs in, so I have a way to go on that one. I’m especially looking forward to playing with the band again…

The new record is coming out on vinyl. Is this your first vinyl release?

VP: Yes – this is the first Vinny Peculiar vinyl release. The label Cherry Red put out the Parlour Flames record on vinyl, but this is a first for my tiny little label and me. I’m hoping against hope I can shift a few of them – well, a lot of them actually, but we’ll have to see…

What was the last record that you bought?

VP: It was Kate Tempest – The Book of Traps and Lessons, and, before that, Be Bop Deluxe: The Very Best of The Rest of… both on vinyl.

Finally, what do you most enjoy doing while you still can?

VP: Playing football with my grandson, but, alas, my knees are giving way…

While You Still Can by Vinny Peculiar is released on October 28 (Shadrack & Duxbury Records). It’s available on CD digi pack and vinyl, or as a download.