The last time Say It With Garage Flowers spoke to Ocean Colour Scene, Specials and Paul Weller guitarist, Steve Cradock, it was during lockdown last year.

Used to being on the road, he’d kept himself busy during those weeks of confinement in 2020 and early 2021 by remixing and reissuing his second solo album, Peace City West, which came out last year, and working on a new instrumental record.

“Everyone has got their own stories about those strange couple of years – I had more time than I’ve ever had before. It was liberating in one way and it went on for so long it became like a dream state, didn’t it?” he says, speaking to Say It With Garage Flowers from his home studio, Kundalini, in Devon. “We could still work on music, so it was really hopeful.”

The instrumental album he was crafting has just been released –  it’s called A Soundtrack To An Imaginary Movie and it soaks up influences including jazz – Cradock was reading Ashley Khan’s book about John Coltrane’s A Love Supreme while he was making the record and he immersed himself in that classic album –  as well as folk, Easy Listening, soundtracks and classical music, but, he says,  “ultimately, I could play most of these tunes on an acoustic guitar or piano. I loved the melodies. The second side is quite piano-led.” 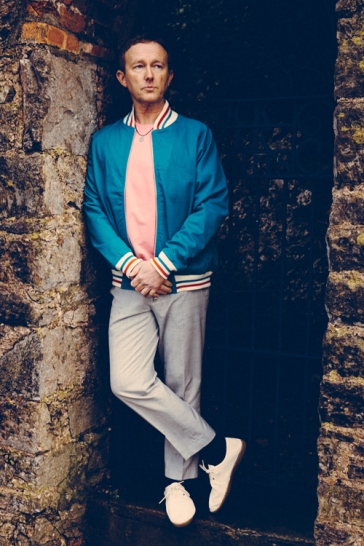 “I went from listening to Radio 6 to Radio 3 – I was listening to a lot of classical music. That was around me all the time,” he says. “Some of the tracks on the album are indie-classical. Two pieces of music came together on the same day – it just sort of happened. I played the melodies on acoustic guitar and I thought, ‘There’s something there.’ ”

He adds: “I had a couple of tracks before that, including the one where Brian Travers plays saxophone [Sarcoline].”

Travers, who died last year, recorded the sax parts for Sarcoline 10 years ago, and Cradock had it as a demo.

The track, which also features Hugo Levingston on flute, is haunting and moody – it sounds like the theme for a ‘70s TV show about a private detective who lives and works in a shadowy city and hangs out in a jazz club in his spare time.

“The idea was that it’s in a jazz club and you’re walking between each floor, which has different music or a different take on the same melody – that was the vibe. You hear an acoustic and flute version and then you walk into another room and you hear the same track playing, but with loads of reverb,” he explains.

So, has Cradock always harboured a desire to make music for films? “I’ve never thought about it – the album title was meant as a joke,” he says. “I’ve always worked on pieces of music… Back in the day, with Ocean Colour Scene, those became Hundred Mile High City, The Riverboat Song or You’ve Got It Bad.”

‘Dragon’s Blood is a bit strange. I played it to my dad and he said, ‘You’re taking that off, aren’t you?’

His wife, Sally, is on the eight-minute, meditative and minimalist mantra Dragon’s Blood – she is credited with playing Nibiru gongs and Tibetan singing bowls. “She’s a gong master and she’s into hypnotherapy,” says Cradock, adding: “A Love Supreme starts with a gong… I was having lots of gong baths and getting into it – the healing of the hurts.

“Dragon’s Blood is the first song on side two – it’s a bit of a strange one. I played it to my dad and he said, ‘You’re taking that off, aren’t you?’ I wanted to have different flavours on each side, so that’s what I thought should start side two because it’s been transcending me, without sounding up my own arse. It was an energy or a power. It won’t be everyone’s cup of tea, but give it time and get into it – if it’s the right moment, I think it will really take you somewhere.”

So, is he a spiritual person? “I wouldn’t know if I am or not. I think everything’s spiritual, so that would be a ‘yes’ probably.”

Some of the tracks on the album, like the opening composition, Lapis Lazuli, which has some beautiful cello on it, are quite melancholy and pastoral… “Yeah – it’s reflective,” says Cradock.

On the other hand, there’s Cochineal, which is groovy loungecore, with Hammond and congas – lift music goes vintage sci-fi. “When I first heard it, it reminded me of the Wurlitzer that I used to hear playing when I went ice skating,” he says.

The final track, Gunjo, has some Bacharach-style Easy Listening brass on it, courtesy of Tim Smart from The Specials. “I love the melody line, which I think is really memorable, and the way it has time signature changes – I don’t normally do that,” he says. “It goes from a 3/4 waltz to a 4/4 thing. It is a bit Bacharach, I suppose.” 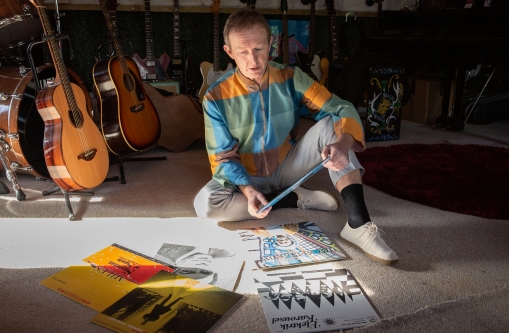 ‘I sent the record to Weller – he listened to it all the way through and said, ‘Wow – it’s a journey’ ‘

Does he think this album will surprise people, as it’s very different to his other solo work? “Yeah – that’s good, isn’t it? I sent the record to Weller – he listened to it all the way through and said, ‘Wow – it’s a journey’.”

So, we’ve got the soundtrack to an imaginary movie – now someone needs to make the film…

“That would be fucking hard to do.”

A Soundtrack To An Imaginary Movie is out now on Kundalini Music: CD, digital and vinyl.