It’s a hell of a ride, mixing Cash-like country with a fistful of Spaghetti Western songs, Mariachi brass, haunting harmonica and Morricone moodiness.

Say It With Garage Flowers invited her to an Italian café in North London to talk retribution and revenge, women in cowboy films and her favourite Western soundtracks and movies, and to tell us how her and her gang of outlaws made the album.

We wanted to go to Nashville, Almeria or Cinecittà, but we couldn’t afford it – if only we’d had a few dollars more…

Over a cup of tea in an Italian café in North London – Mario’s in Camden – Sarah Vista is telling Say It With Garage Flowers where her love of Spaghetti Westerns and cowboy culture comes from. And, just to clarify, she hasn’t brought her guns to town…

“There are photos of me when I was three years old, sat on a rocking horse, in front of a Western film. I liked the music and I thought I was in the movies. That’s a strong memory for me. When I was a child, I used to think, ‘why is it always men in Westerns?’ It’s a little fantasy I had…” she says, smiling.

“The hero – the person who strides in and saves the day – is always male. It’s not a man’s world anymore, it’s a man’s and a woman’s world – there should be a fair amount of women taking their share of the gold…”

Women are often portrayed as victims in Westerns, rather than heroines, aren’t they? Do you feel they’re misrepresented in cowboy films?

Sarah Vista: I do, but there are a couple of strong women, like Calamity Jane [Doris Day] and Joan Crawford in Johnny Guitar, who’s incredible – I was heavily influenced by her when I was a kid. There are also some softer female characters, like Helen Ramirez, who is played by Katy Jurado in High Noon, and Claudia Cardinale in Once Upon A Time In The West, who comes across as having a hard time, but is actually a strong central character [Jill McBain].

‘My songs are delivered with my tongue planted firmly in my cheek  – contrary to popular belief, I’ve never actually killed anyone!’

With that in mind, some of your songs, like Madame Moustache and Belle Starr, feature strong and violent women, who don’t suffer fools gladly and are out to get revenge on men who’ve wronged them. Should I be worried?

SV: [She laughs]. My songs are delivered with my tongue planted firmly in my cheek  – contrary to popular belief, I’ve never actually killed anyone! Putting stuff in songs is a form of therapy for me. It’s nice to be able to express myself in a fantasy way – anyone who’s been wronged or treated badly probably has those feelings from time to time. The theme of the album is about retribution rather than revenge. I’m not bitter – I’m just holding people to account for their bullshit and putting it out there.

I’ve had so many women approach me about my songs and lyrics – they get it. I had a difficult past and upbringing and with the Sarah Vista character, I wanted to set some things straight. 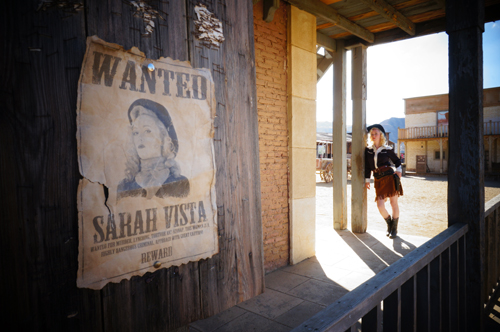 When you’re performing on stage, you go into character, don’t you?

SV: Yeah – I guess so. When I was growing up, I struggled with confidence and I wanted to turn the tables on that. I’ve finally found a character that I’m comfortable with exploring and I’m going to stick with it.

When you were growing up, did your parents like music and films?

SV: My dad was a film buff and my mum was a massive music fan – she was obsessed with Elvis – and she has the most incredible voice I’ve ever heard. As a child, I used to sing with her.

Music’s always been there – when I was growing up I used to steal my mum’s guitar all the time and try and play it. I really wanted my own guitar. I started learning to play on her guitar when I was 12 – my mum bunged me a Bob Dylan album and said, ‘if you can work out how to play that, I’ll get you a guitar’. Four or five hours later, I’d worked out the chords by ear. She said, ‘four hours? I was hoping it would be four years – I haven’t got any money to buy you a guitar’. That went on for ages.

About a year later, after I’d worked out some Hendrix licks, she saw that I was serious about it and she bought me one – she saved up for a long time. I locked myself in my room for the rest of my childhood and started writing songs.

‘I had a difficult past and upbringing – with the Sarah Vista character, I wanted to set some things straight’

In the late ‘90s, I joined a band called Suck Baby Suck as a guitarist – I played with David Scinto, who wrote the scripts for the film Sexy Beast, Gangster No.1 and 44 Inch Chest.

I started writing songs with him – we were a great band. We had a good adventure together – it was garagey. I kind of outgrew it – I was young and naïve and I wanted to do more and move faster, so I walked away from it.

I tried a load of bits and pieces, but nothing came together, so I wrote my own album and I released it independently, but it fell on deaf ears – it was punk, but it had my stamp on it. We all have to start somewhere…

I also did a single with Paul Kaye called Live Sex On Stage – he did it as his character, Mike Strutter – we had a great laugh doing that.

When I first met you, five or six years ago, you were fronting a rockabilly band called Viva Le Pink…

SV: I set that up with the intention of having an all-female rhythm and blues / rockabilly band, with a horn section, but it didn’t quite pan out… I wasn’t feeling it, so I quit my own band. The Sarah Vista thing had been bubbling under for a long time.

SV: I decided I was going to make a Western soundtrack, in the style of my favourite records – the ultimate project.

Cleverly, the album is split into two different genres – Country and Western. One side is country songs, but the other is Spaghetti Western-flavoured…

SV: I didn’t set out to do that – I set out to make a Western record. I wrote about 26 songs in the space of four of five weeks! It was natural – the songs kept coming out. I was, like, hold your horses!

I see what you did there…

SV: My imagination ran away with me. The Western thing was natural, but the country thing… Someone once said, ‘you don’t choose country music, it chooses you’… I thought that was lovely. I definitely didn’t set out to make a country record, but there’s a lot of darkness in country music and that fits with me… Everyone was doing country, but no one was doing the Western side of it.

‘I definitely didn’t set out to make a country record, but there’s a lot of darkness in country music and that fits with me’

You rounded up a gang of outlaws to help you make the album, didn’t you?

SV: I worked with Adie Hardy, who produced it – he’s a friend and I’ve worked with him a lot. I also found a drummer who’s a country fan [Tom Meadows] – he’s actually Kylie Minogue’s drummer – and my friend, Philip Doyle, recommended a lapsteel player called Jeff Mead. Jeff and I have started writing together.

Emma Goss [double bass] was also recommended by Philip Doyle – she’s great. I also worked with Terry Edwards [trumpet and baritone sax], who’s played with Nick Cave and Tom Waits – he’s an incredible musician and he’s really added something to the record. Johnny Trouble [harmonica] recorded his parts in Germany, where he has his own studio.

Was it an enjoyable album to make?

SV: It was fantastic! It took two years to make. I had no money, so we did it in studio downtime at Unit 2 Studios in Acton, London.

You released the album on your own label, Gallow Romantic. Are you going to put out records by other artists?

SV: That’s my plan. There’s so much good stuff that goes under the radar because the industry is so up its own arse, it’s chasing its tail. 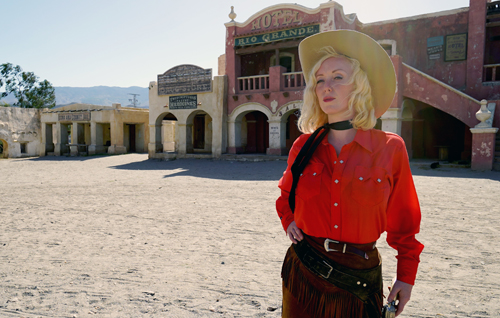 You’ve also been working on a soundtrack for a Spaghetti Western film, haven’t you?

SV: Yes, but you’d actually class it as a Paella Western, as the director’s Spanish. He’s a guy called Danny Garcia – he did the music documentaries The Rise and Fall of The Clash and Looking For Johnny – the Johnny Thunders biopic.

A friend of mine, Ray Gange, who was lead actor in Rudeboy, got a part in a Western film that Danny was doing. I was like, ‘what the fuck? Get me on the soundtrack!’

‘For me and my music, this year is going to be good, but for my naysayers it’s going to be very bad and, politically, it’s looking pretty ugly’

He said, ‘he’s already done the soundtrack’. I said, ‘no – he hasn’t!’ So I sent Danny some short clips of three songs and he said he wanted them in the movie and he’d make room for them. The film’s called The Price of Death and my song Killing Fever is the opening track. You can see the back of my head in the film… It’s due out soon.

I got to go to Almeria in Spain, where Sergio Leone shot his classic movies – the sets from the ‘70s are still there. It’s amazing! I’ve also been asked to do something else, but I’m keeping that firmly under my Stetson at the moment…

So, is the year ahead going to be good, bad or ugly?

SV: For me and my music, it’s going to be good, but for my naysayers it’s going to be very bad and, politically, it’s looking pretty ugly. You’ve got to hold on to what’s good in the world, do cool stuff, keep people entertained and stay close to the good folk.

Can I ask you to choose your top five favourite Spaghetti Western films and Top five Western soundtracks?

SV: I can’t put them in order, but my favourite films are A Fistful of Dollars – it has a revolutionary soundtrack and it created the Spaghetti Western sound; The Good, the Bad and the Ugly –  it’s a tense epic and if you don’t like it, you must have something missing; Django by Sergio Corbucci – it’s a classic – and Once Upon A Time In The West – another classic. The last film is The Great Silence from 1968 –  Jean-Louis Trintignant plays a mute gunfighter and Klaus Kinski is the bad guy – a bounty killer. He’s so creepy. It’s an epic film and it’s set in the snow.

For my soundtracks, I’m going to choose A Fistful of Dollars; Once Upon A Time In The West –  for the harmonica and Jill’s Theme, with the operatic female vocals; The Good, the Bad and the Ugly for The Ecstasy of Gold; The Great Silence, which is an overlooked Morricone masterpiece –  I think it’s one of his best works – and here’s a wild card, the Django soundtrack by Luis Enriquez Bacalov. It has Rocky Roberts vocals, electric guitar and a ’60s and ’70s feel to it. Tarantino used it in Django Unchained.

Do you think your next album will have a more expansive and experimental sound?

SV: For the first one, I had to rein it in a bit, but for the next album I might let it all hang out and disappear down a Spaghetti Western rabbit hole!

Sarah Vista’s Killing Fever is out now on Gallow Romantic. For more info, visit https://www.sarahvista.com . See the Spotify playlist below for some of her essential Spaghetti Western soundtracks.