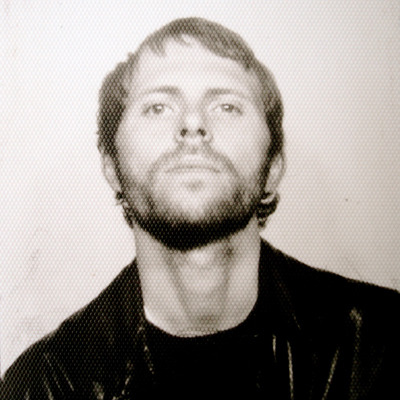 Here at Say It With Garage Flowers, we’ve been fans of singer-songwriter Richard Warren since we heard his 2011 album, The Wayfarer – his second solo record under his own name. In fact, it was our favourite album of that year.

In 2013, we raved about his album Rich Black Earth, calling it, ‘atmospheric, moody and nakedly emotional – evoking Nebraska-era Springsteen’.

His latest release, Disentangled, is certainly going to figure highly in our 2017 albums of the year list. It’s less dark than some of his previous releases – more soulful and stripped-down – but still with a nod to the ’50s sounds of Sun Records, melancholy, late-night ballads in the vein of Nick Lowe, Roy Orbison and Richard Hawley, and twangy guitar instrumentals that could be soundtracks to arthouse films that don’t exist yet.

We spoke to Richard, who’s played guitar for Spiritualized, Starsailor, Dave Gahan and Soulsavers (featuring Mark Lanegan), about the new album – his first in four years – and found out why he’s trying to simplify what he does, hone his craft and get back to basics in this crazy world we’re living in…

Hi Richard. It’s good to chat to you again. I really love Disentangled – I have the limited edition green vinyl version of it…

This is your fourth solo album. It’s been four years since your last one – 2013’s Rich Black Earth. How did you approach this record?

RW: It was recorded over such a long time. After the last one, I just carried on recording – I never stop or take a break. I’ve got a studio at home, so the day after I finished the last album, I started on the next one.

Some of the tracks were done a couple of weeks before I finished this album and some were done the week after I did the album before. I think Only Always [the first song on the record] was the last thing I recorded – two weeks before this album had to be delivered. I was in the studio and I did the song in one day.

By the time it came to hand this album in, I’d recorded 50 to 60 tracks! I didn’t set out to do that. There’d been a year in-between each of my other albums. In 2014, I’d got an album’s worth of stuff together – I tried to find someone to put it out, but nobody seemed interested. Four or five of those tracks made it on to this album.

So you have a lot of unreleased material in your vaults?

RW: Yeah – I don’t know whether it will ever see the light of day. I tend to just move on to the next thing all the time.

You made the record in your home studio. What’s your set-up like?

RW: It’s got more and more basic – I have Pro Tools and I have some tape machines. It’s a blend of digital and analogue. I like being in an analogue world, but it’s quite difficult…

The new album doesn’t sound as dark as some of your other records. It’s very stripped-down and some of the songs have a real ‘50s feel to them. Last Breath – which is one of my favourite tracks on the album – sounds like a lo-fi Elvis…

RW: Yeah – definitely. I like that three-part harmony, Jordanaires kind of thing. I generally kind of revert to that sound – I love those records. The Sun recordings are up there with my favourite records of all time – the Elvis and Cash stuff is mind-blowing.

I’m simplifying my set-up and my recording equipment – if you listen to my first album, it’s quite complex. There were a lot of instruments. I’ve got into simplifying things – even the lyrics on this album are about simplifying. There’s a song called Simplify on the record – I’m singing about what I’m trying to do, which is quite odd. I didn’t plan it to be like that. I’m as into production as I am writing records and playing on them. I’m not on a mission to be retro or old-fashioned. All I’m doing is writing and recording songs in the way that I want to hear them – it’s a sound that I love. With this record, I’ve gone very mono – it’s not mono, it’s stereo, but it’s a lot more simplified. I just use Pro Tools almost like an 8-track tape machine – it’s just something to record into. I just try and write a good song.

Less is more… There are some other ‘50s-sounding songs on the album – the gorgeous, melancholy ballads No Way Back and Safekeeping. When we last spoke, in 2013, you said you were influenced by Nick Lowe – in particular, his albums The Convincer, At My Age and The Old Magic. It sounds like those records rubbed off on your new record, too…

RW: Those Nick Lowe records are fantastic – they’re perfect. They changed the way that I wrote songs. I’m trying to write songs that are easy to play – simple songs that just roll out. That’s the Nick Lowe thing for me. He’s a perfect songwriter – his records are a masterclass in songwriting. His songs hark back to Willie Nelson and Cash. Willie Nelson wrote Crazy, which I think is the perfect song – it sounds like the simplest song in the world, but it’s got everything. It has a story – a beginning, middle and an end – and it’s got a key change… it’s got every songwriting trick you can do, but when you listen to it, it sounds simple. That’s what I’m trying to learn how to do. All I’m interested in doing is to try and better my songwriting. With this album, I was a lot harder on myself – I kept rewriting and rewriting things. I’d like to write something faster now…

There are quite a few instrumentals on the album. Would you like to write and record a film soundtrack?

RW: I had quite a lot of instrumentals just lying around. At one point, I decided to make a whole album of instrumentals – I thought I couldn’t write songs anymore. I’m a bit like that – one day, I’ll get up and say, ‘this is rubbish – I’ll trash everything’. To be honest, I hit that point a lot this time…

I would like to score a film – I think it would be interesting, if it was done in the right way. I’ve done odd bits for film and TV before – it’s a really difficult and time-consuming thing to get into – and it has to be exactly what they [the directors] want. I loved the stuff Neil Young did for Jim Jarmusch. I like the idea of just playing along and coming up with stuff in the moment, but I suppose you have to be someone as important as Neil Young to do that… I’d like to try it – anything that stretches my musical horizons is great.

‘At one point, I decided to make a whole album of instrumentals – I thought I couldn’t write songs anymore’

The title track of your album – Disentangled – is an instrumental. Why did you name the record after it?

RW: An album title for me is always something that comes right at the end. Generally, I always find it a bit of a struggle. Some people have the album title at the beginning and they work to that. I do that with songs – I’ll have one line of a lyric, or a title… I’ll have all the songs and then I’ll say, ‘oh, what am I going to call the album?’ I go through all the lyrics and try and find something that sounds interesting. ‘Disentangled’ was a word I read and it also fits with the cover – the photo of a tree. I was inspired by that – as the songs are about simplifying things, it’s like I’m trying to disentangle myself from all that… I think people are trying to simplify things – hopefully it will resonate. It’s a crazy world – it’s so fast – and I want to make music that helps me to relax. I can easily play these songs – they’re laid-back and not too intense.

RW: Exactly. Artists like Nick Lowe are always at their best when they’ve just got an acoustic guitar, they’re on their own and you just hear them play. It’s so relaxed and easy to listen to. He has such control – Kris Kristofferson is another. He’s incredible – his songs are effortless. He is the song. Him and Nick Lowe are the people I’m always trying to emulate.

Let’s talk about your other project – Kings of the South Seas, with Ben Nicholls and Evan Jenkins. You’ve recorded your second album – Franklin – and recently played some preview shows. The record is out next year…

RW: It was supposed to be out now, but it will be out February 2018. It’s a good album – we worked with [producer] Ben Hillier. He’s great – the record sounds incredible. It’s a concept album about the explorer John Franklin.

‘When no one was interested in putting a record out, I lost confidence and I ended up making music for myself, but the songs came out of that’

Can we expect any solo Richard Warren shows?

RW: I’d love to do some, but I struggle to get any gigs. When no one was interested in putting a record out, I’ll be honest, I lost a bit of confidence and I ended up making music for myself, but the songs came out of that.

I’d love to see you play some shows…

RW: I’d like to go out and play this album solo, but the dream is to put a band together. I’d love to do that, but to do those kind of gigs and to get a great bunch of people, you’ve got to pay ‘em well and to pay ‘em well, you need good gigs – you can’t get one without the other. I’ll keep going – I’ll never give up. I started writing the next album the day after I handed the last one in and I’m really happy with how it’s coming on.

Disentangled by Richard Warren is out now on Hudson Records