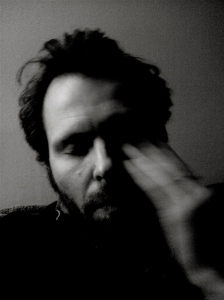 Richard Warren’s new album Rich Black Earth – the third in a trilogy – is one of the most atmospheric, moody and nakedly emotional records of 2013, evoking Nebraska-era Bruce Springsteen, with its stripped-down, dark, back to basics feel.

Drawing on raw blues, country, and eerie, echo-laden ’50s twangy guitar, it’s a perfect soundtrack for the wee small hours of the morning. I spoke to him about how he creates his ‘primitive soul’ music.

Congratulations on the new album, Rich Black Earth – it’s a brilliant record. Your last album, The Wayfarer, was my favourite long-player of 2011, so it’s great to be able to have a chat.

Can you tell me how you recorded the album and how you achieved such a raw, atmospheric sound?

Richard Warren: Thanks for the kind words on the album. I record all the songs in a small room at home. I’ve got a really primitive studio setup in there. I’ve been downsizing the equipment for years now. The less choice I have, the clearer and more focused the songs seem to be.

I’m down to just a two-track reel-to-reel tape machine, an old spring reverb and a tape echo. The tape recordings are pieced together in Pro Tools. It’s a very clunky, odd system, but I like clunky, odd records.

RW: It’s taken me about 20 years to fully realise that ‘the song’ is king. So I spend as much time writing and as little time recording as possible. I think the best producers understand that getting a record to ‘sound nice’ is not really that important. Essentially, we emotionally connect to words, melody and performance, not production values.

Like its predecessors Laments and The Wayfarer, it’s a very moody and dark record in places. How do you capture that vibe?

RW: Thankfully it comes pretty naturally. I never dim the lights to ‘get the vibe going’ and all that kind of thing… There’s no science to getting the perfect take. You have to keep playing and listening until you hear something that makes one particular performance special.

In my experience that something special is usually a mistake – a crack in the voice, an out of time drum fill – anything that pulls your ear really. I tend to hang mixes on the string of errors in a performance.

There are some pretty out of tune guitars on old Stax records and that’s all part of the deal. Steve Cropper’s guitar solo on Green Onions [by Booker T and the M.G.s] comes in way too loud, for some, and you can hear the engineer whip the fader down. It would have taken another two minutes 55 seconds to fix, but I love that they left it on the final master. It’s the most exciting part of the song.

You get some extraordinary sounds from your guitar, such as on Ox and Rivington Street (eerie, ‘50s style, twangy instrumentals, which kick off the new album and its predecessor, The Wayfarer, respectively). What’s the trick to getting those effects and what inspired those tunes?

RW: The ‘surf’ instrumentals have become favourites with a lot of people, especially live, and, weirdly, they’ve been received well by radio. I initially included them to pull me away from being tagged as an acoustic folk-picker. There’s no real trick to the sound, though – an old guitar and amp, as much echo and wobble as you’ve got and crank it up!

This record is very stripped-down – more so than some of the songs on its predecessor. Was that your intention when you set out to make it? How did you approach this album?

RW: These days I record everything with the intention of it being a lone guitar and vocal performance. If they stand up on their own in that form I’ll leave them like that. It’s a tough discipline to crack – it’s much easier to throw the kitchen sink at everything.

My theory is that the stronger the composition and the better the basic root performance of the song, the more it will repel overdubbed instruments. They used to call it ‘sweetening’ a mix in the old days. Just give me the meat and potatoes…

There’s a soulful feel to this record. In places it reminds me of Bruce Springsteen, circa Nebraska – particularly on a track like Know.  Is that a valid comparison?

RW: Yes, primitive soul. I’m a big Springsteen fan and for me Nebraska is his masterpiece. There’s definitely a connection in the underlying blue-collar aspect of the songs. And I suppose in the fidelity of some of the recordings.

Is it true that the new album is intended to be the third in a trilogy? If so, please elaborate….

RW: I thought if I put that statement out there it might hold me to some sort of future musical shift. To me the first three albums are in black and white. I’d like to make a colour record.

Looking at some of the track titles on the new album – Flowers, Rot and Rust, Rich Black Earth, Ox, Weeping Tree, The Berry and The Thorn – I was wondering if this is your getting back to nature album?

RW: I’d not planned it that way, or, to be honest, even noticed the correlation. I like the idea though, and I have been downsizing recently, so maybe I am unconsciously getting back to the land…

Flowers is a gorgeous country shuffle and one of my favourite tracks on the album. Can you tell me more about that song?

RW: I got the opening lines, ‘I only tell of sunny hours, let others sing of storms and showers’ from an inscription on an old park sundial. It’s such an inspiring couplet. If you’re lucky enough to stumble across something as strong as that, the rest of the song will usually flow out really easily. It’s one of those songs that on a good night seems to plays itself.

What music are you currently into? What were you listening to when you were writing and recording Rich Black Earth?

RW: Nick Lowe’s The Convincer, At My Age and The Old Magic are top of the pile and always on constant repeat. I’m looking forward to his Christmas album. Also, Willie Nelson’s Teatro, Bill Callahan’s Apocalypse, Elvis Costello’s The Delivery Man, Tom Waits’ Bad As Me, Mark Lanegan’s Blues Funeral and Dylan – from Time Out Of Mind to Tempest.

My best album of 2013 would be Mark Lanegan and Duke Garwood’s Black Pudding – a 21st century blues album with no retro edge. It’s incredible.

So, what’s next for Richard Warren? Any live dates this year or next? What would you like the next record to sound like? Have you got any ambitions to fulfil?

RW: Just to hang in there making music full time would be enough, to be honest. I’d love to get on the road, but I don’t have an agent, manager or label, so it’s almost impossible to get any good live work in.

And finally, if you were the Lonesome Singer In The Apocalypse Band (a song from Richard’s second album The Wayfarer), who else would you want to be in the band with you?