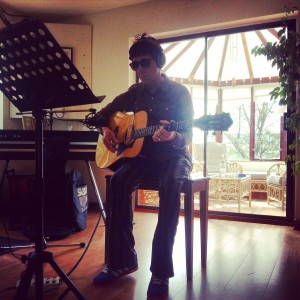 Signed to Alan McGee‘s new label 359 Music, their self-titled debut album is out this month. From snarling, ’50s-inspired rock & roll, to heartfelt, piano-led ballads and country tunes, it’s a solid record, with Lowe in fine form.

Congratulations on the debut Gun Club Cemetery album. How does it feel to have made it and to have it out there? It’s the first record you’ve released in a while…

Alex Lowe: It feels great, Sean. It is the first record in a while, so I’m glad I made it. I think it turned out well. It only took ten days to record, but it doesn’t feel rushed. I think the songs sit well together and are very strong. It has something for everyone on it.

It’s co-produced by Steve Ransome, who also plays keyboards and bass on the album. He’s worked with you on your solo albums, hasn’t he?

AL: Yes. Steve is a genius piano and keyboard player – I’ve known him for almost 30 years.

There’s some great piano on the album – very rock & roll…

AL: Yes – some old time Jerry Lee Lewis stuff. I love the ‘50s era for music, so I dabbled a bit with that sound.

It’s a very varied album – good, old-fashioned rock and roll, big, melodic ballads and country-rock/pop…. What were your inspirations and what were you listening to while you wrote and recorded it?

AL: I was listening to Townes Van Zandt, John Denver, Johnny Cash, The Who, The Beatles and The Rolling Stones.

Sunset Shadows is quite trippy and psychedelic, with its backwards guitar effects. What inspired that song?

AL: I think I was watching a lot of ‘60s cult movies when I wrote that.

The Hollow Face of A Shallow Man and Needle Aside are great rock and roll tunes. Can you tell me more about them?

AL: Hollow Face… only took around 20 minutes to write – it came out of nowhere, really. Needle Aside is about a girl I know from LA. She lost her boyfriend to a gunshot and she became a junkie not long after…

There are some big ballads on the album, too. I like Before Sunrise – it’s gorgeous.

AL: It’s my favourite track on the album. Alan McGee told me to go and write another ballad and that’s what came out. I was listening to Otis Redding when I wrote it.

Dead Inside is my favourite song on the record. Can you tell me more about it?

AL: Yeah – it’s about street life as a kid – growing up, the fights, the girls, the guns, being in a bad place and trying to escape.

After being solo for so long, what’s it like being in a band again?

AL: It’s great. I love playing live and I think having a band is the best way to do Gun Club Cemetery.

So, is it fun to be working with Alan McGee again?

AL: He is the best. The guy hasn’t lost it one bit. In fact, I think he is more turned on by music now. It’s great.

Can we expect some live dates from Gun Club Cemetery soon?