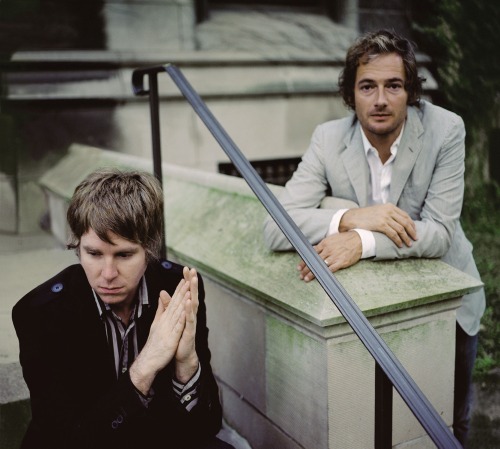 In my previous blog entry, I wrote about trying to deal with the
recent bout of hot weather, which makes me very depressed, cross and
generally hot and bothered.

Well, I’ve now found a song that could be my theme tune – it’s called
Make It Through The Summer.

I recently spent a few days in Chicago (mercifully, it wasn’t hot) and
became dangerously addicted to shopping in Records Reckless – while I
was over there, I visited two branches.

What I love about shops like Reckless are the handwritten
recommendations and mini reviews that are stuck on some of the CD
covers, so if you’re browsing – like I was – and you’re not sure about
buying an album, you can read the store staff’s reviews and comments
and then make your mind own mind up.

As I was in Chicago, I was perusing the Wilco section (well, it is
their home town) and I stumbled across an album by
The Autumn Defense – a duo comprising Wilco members John Stirratt and
Pat Sansone. Hell, I didn’t even know this spin-off band existed.

The album’s called The Green Hour and I was drawn to it by the store
sleeve notes, which said it recalled ’70s AM radio pop, pastoral folk
and The Beachboys.

Add to that the fact that they’re in Wilco and I knew I had to be on
to a winner, so I bought it. It’s a great little record – those guys
at Reckless Records know their stuff. My favourite song is the
aforementioned Make It Through The Summer.

It sounds a lot like Wilco doing The Beachboys, which is fine by me.