The album came out in 2021, but some of the socio-political songs on the record are even more relevant now than they were written – especially in the light of the cost of living crisis the UK is facing and the strange times we’re living in, when hate seems to the dominant force and emotion, rather than values like love and compassion.

There are moments on Back To Zero that recall the crunching power-rock of The Who – This Love – the soulful sound of Paul Carrack-era Squeeze – Human Kindness, and, at times, like on the angry and acerbic racket of Money Goes To Money – a diatribe on the wealth divide in the UK – the frantic and urgent, Hammond-organ fuelled Can’t Do It, which tackles extreme anxiety, and the grunge-tinged, Angels With Guns – a stinging comment on US kids carrying out school shootings – you’ll be reminded of vintage Elvis Costello. So, it’s no surprise to find that Ronan is actually his younger brother – Elvis’s real name is Declan MacManus.

“Just so you know, I’m happy to talk about Dec,” says Ronan – he never calls him Elvis – sipping a non-alcoholic drink, outside the Mad Squirrel craft beer shop and bar, in Chesham, Buckinghamshire, on a hot July afternoon. More on that later, but, in the meantime, let’s get back to zero…

So, how did you and Luke first meet?

Ronan MacManus: I met Luke at his barber’s shop, which was in Watford – we had a mutual friend. He was in a duo before and that kind of fell apart, so he was looking for something else before.

I was in a band, The BibleCode Sundays, and I needed a side-project. I’d done solo stuff before – I’d released an album back in 2010 and I’d finished a record with my younger brother, Rory, called Elephant In The Room.

Luke and I met at the barber’s shop and we started to write after hours and it really clicked – for the first time, I wasn’t playing guitar. Luke took care of that I was taking care of the lyrics and melodies.

There’s some great guitar on the new record…

RM: Luke’s a real blues head – his dad was the house drummer at the Scotch of St James [in London] for years. He’d worked every night for six months, but, famously, took the night off when a young guy called Jimi Hendrix got up and played. It’s one of those great rock ‘n’ roll stories.

So, when you and Luke got together, things happened pretty quickly…

RM: Luke and I gelled – it was meant to be an acoustic duo at first, but we quickly realised it needed to be bigger than that, so I asked the bass player [Enda Mulloy] and the drummer [Carlton Hunt] from The BibleCode Sundays to come and join us. Carlton had played with Bad Manners and been in bands for years.

The four of us went to Ireland and recorded the first Brand New Zeros album, which was called Brand New Zeros. We recorded the whole of the album in three days – in-between drinking sessions. We arranged all the songs so we could play them drunk – there were no weird, fancy bits. We were emulating all the bands we listened to as kids, like grunge stuff, but we called it acoustic grunge.

Myself, Luke and Enda all had similar teenage musical upbringings – we all got into the grunge scene: Nirvana, Pearl Jam, Alice In Chains, Soundgarden…

Luke and I grew up in different parts of London – Harrow and Twickenham – and Enda had grown up in Mayo, in the west of Ireland. Carlton was a bit older than us, so he’d grown up on things like my brother’s music.

‘Luke’s dad was the house drummer at the Scotch of St James. He worked every night for six months, but took the night off when a young guy called Jimi Hendrix got up and played’

And now you have a second album out, Back To Zero, which, musically, is a step on from the first one…

RM: We started recording it at RYP, which is a studio in Rayners Lane [north west London], where [singer-songwriter] Alex Lipinski recorded his last album. Then [in 2017] our drummer, Carlton, died and everything was shelved. Fast forward to 2018/2019 and we started recording again.

This record has a bigger sound than the first one…

RM: The idea was that it was going to sound much more like a four-piece. One night, myself, Carlton and Luke met up in the studio – Enda couldn’t make it – and we did a song called This Love, which is on the record. The version you hear is the only time we ever played that song.

We jammed and recorded it, in the way that U2 used to do and probably still do – play some stuff together, record it and trawl back through it. There was the riff and then the drums came in. I came back in after being out of the room, and I started improvising lyrics – this thing happened.

After we’d listened to it, we thought ‘that’s done’. When Carlton died, we didn’t have any other way of recording it, so that’s how it ended up.

It’s got a dirty bluesy sound…

RM: Yeah – Luke came up with that riff. The song became the catalyst for the album.

So, after that you nailed that song, you carried on recording the rest of the tracks that ended up on the album?

RM: It was actually going to be a solo album – there was no band, but I got some friends to come to RYP to play bass, guitar and keys, with a new drummer, Joe.

We then went to another studio, with a producer called James Halliwell, who played keys with The Waterboys – I’d met him 20 years before, when he was Marti Pellow’s keyboard player. He has a studio in Richmond and we started to flesh things out – he played piano on Human Kindness.

We then did some recording and mixing with James Knight at his studio – he pulled it all together and then, when it was finished, we heard it, we thought ‘this is the Brand New Zeros album that we started doing four years previously’. That’s when I decided I wanted it to be a Brand New Zeros album.

Hence the title, Back To Zero…

Money Goes To Money is one of my favourite songs on the album. What can you tell me about it? It’s an angry song about the wealth divide in the UK …

RM: It was written around the time Jacob Rees-Mogg was lying on the backbenches of Westminster – it was a reaction to that.

I love the guitar solo…

RM: Luke played it – I wanted it to be almost like he was having an argument with himself. It was meant to be glitchy and come in and out.

He’s quite a chilled guy, but when we were recording it, I needed him to be angry, so I was shouting in his face, saying ‘C’mon! C’mon!’ I wanted the solo to be a bit like Radiohead – atonal and choppy at times.

It’s quite an angry album at times, isn’t it? When were all the songs written?

RM: They were written pre-lockdown – the album was finished and ready to go by the end of January 2020, but it didn’t make it out until 2021.  I’d gone through some mental health issues and some of that is addressed on the record. Luke went through a breakup and there were some rocky patches.

Talking of angry songs, Can’t Do It is a real rocker, and it has some great Hammond organ on it…

RM: It was written about a time when I sat outside a gig and I just couldn’t open the door – my anxiety was so bad. It’s all about self-doubt and depression – mental health issues. It’s about hating yourself.

The album veers from heavy, angry songs to ballads. There are some complete mood changes, like on the slow song, Free As A Bird, which shares its name with a Beatles song…

RM: That’s about me after I’d given up drinking. It was written about a moment, when I was sober, I was looking out of the window at the garden and the sun was coming in –  the clouds had cleared on some of the mental health issues I’d had. I felt happy for the first time and I wanted to capture it.

RM: Yeah – you’d always hear the parents say, ‘He was such a nice kid – we didn’t see it coming…’

RM: The verses are very Costello.

Human Kindness is one of my favourite songs on the record. It’s a song about compassion and how we treat each other. I think you sound like Paul Carrack on it.

You talked about being sober earlier. Cigarette, which has a Deep South, swamp-blues feel, deals with addiction – drugs and drink. It references cocaine in the lyrics…

‘Being Elvis Costello’s brother has opened doors that wouldn’t have necessarily been opened – some people listen to us who maybe wouldn’t have. I’ve embraced it more in recent years’

I had a friend and I could always tell when he was on coke, because his face always looked a certain way and he’d only ever smoke when he was on it. So, when I turned up, he’d be outside the pub with a cigarette and that look on his face. I needed to avoid him to try and keep myself on track. In my mind, I distilled it to just the light of his cigarette in his contorted face.

Finally, has being Elvis’s brother been a help or hindrance to your music career?

RM: A bit of both –  it’s opened doors that wouldn’t have necessarily been opened, and some people listen to us who maybe wouldn’t have. It’s interesting and I’ve embraced it more in recent years. He’s such an extraordinary artist – the musical experiences he had growing up, his record collection, his exposure to music and literature… I don’t think he’ll ever be repeated. His are big shoes to fill.

RM [laughs]:He’s been a big influence – most people don’t get to call up their heroes and ask them for advice.

Back To Zero by Brand New Zeros is out now on Fretsore Records – vinyl and digital. 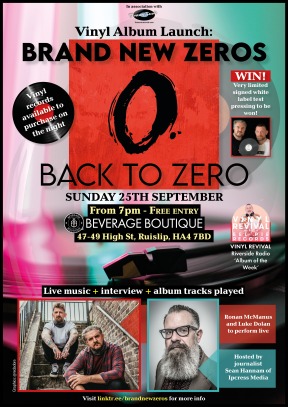 Say It With Garage Flowers founder and editor, Sean Hannam, will be interviewing Ronan MacManus and Luke Dolan from Brand New Zeros live on stage, at Beverage Boutique, in Ruislip, West London, on the night of September 25, for the launch of Back To Zero on vinyl.

The duo will perform songs from the record on the night too and there will be a vinyl playback of some of the tracks.