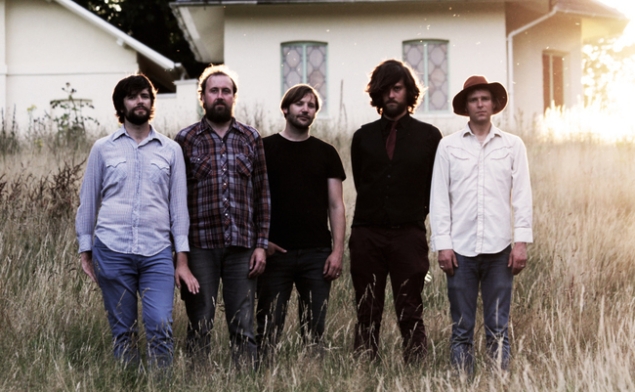 London’s The Hanging Stars have made one of the best albums of this year.

Recorded in LA, Nashville and, er, Walthamstow,  Over The Silvery Lake – their debut record – is a gorgeous psych-folk-pop-country-rock masterpiece that owes a debt to The Byrds and the Cosmic American Music of Gram Parsons, but also Fairport Convention’s pastoral ’60s English tune-smithery.

Willows weep, ships set sail on the sea and songs are laced with pedal steel guitar and shot through with blissed-out harmonies. There are hazy, lazy, shimmering summer sounds  (I’m No Good Without You and Crippled Shining Blues), as well as brooding desert-rock (The House On The Hill], trippy mystical adventures (Golden Vanity) and, on the closing track, the beautiful Running Waters Wide, rippling piano is accompanied by bursts of groovy flute.

In an exclusive interview, I spoke to singer, guitarist and songwriter Richard Olson (The See See, Eighteenth Day of May) and bassist Sam Ferman (The See See and The Lightshines) about the making of Over The Silvery Lake and found out that its follow-up – due out next year – is almost done and dusted. Cosmic, eh?

Your debut album, Over The Silvery Lake, was released in March 2016. It’s one of my favourite records of the last 12 months. This year has been a bad one for the wider world, but how’s it been for The Hanging Stars?

Sam Ferman: We’re going to be a footnote to Trump…. It feels like 2016’s been a bit of a whirlwind. It doesn’t feel that long ago that Rich had an idea about taking the music that we were doing at the time somewhere different and creating a new band. From recording the album in LA, finishing it off, having it released and going round France and Spain and heading to Germany… We’ve packed a lot in.

Richard Olson: To be honest, I didn’t expect for us to get the kind of reception that we’ve been getting. There were so many bits that fell into place with the album. I’ve been in quite a few bands and projects and the best ones haven’t been too try-hard. Don’t get me wrong, we work very hard, but it’s a natural harmony.

Can you tell me about the songwriting process behind the album? Do you all write songs?

Sam: Most of the record was ideas that Rich brought to us. We had the benefit of spending quite a lot of time working out what we wanted to do with them. Rich was quite keen on taking it somewhere different, which is where the pedal steel, violin and flute got involved. We broadened our horizons and didn’t restrict it to just a three person, guitar pop band. We made it more pastoral, folky and country-infused, which was really exciting.

Are you guys into the classic country-rock bands?

Richard: Of course – I’ve always been obsessed with The Byrds and Gram Parsons. Our guitar player, Patrick [Ralla  – banjo, guitar and assorted instruments] is a real country connoisseur – he really knows his shit.

Sam: It’s been exciting for me. As a kid, I was never that into country stuff – Rich got me into it. Me and Rich and Paulie  [Cobra – drummer] – and, maybe to a lesser extent, Patrick  and Joe  [Harvey White – pedal steel] are interested in psychedelic music. It’s been really interesting trying to see what you can do with a psychedelic twist on the country thing. When I was playing music seven or eight years ago, there were no psych bands around, apart from my one and Rich’s one – now there are dozens. It’s interesting to see how far you can push it and mix it with prog-folk and the Fairport Convention thing.

Richard: As much as we like the Flying Burrito Brothers and Sweetheart of the Rodeo, the English folk revival of the late ‘60s is just as important for us – Fairport Convention, Pentangle and John Renbourn.

Your album was made in LA, Nashville and Walthamstow. Did you have a definite idea of what you wanted it to sound like?

Richard: We went to LA and said, ‘let’s do some recording’.

Sam: A lot of it crystallised there. There was a lot of talking about what we wanted it to sound like – quite often, it’s very easy to stumble into recording a lot of stuff and then it comes together in a patchwork at the end. We had a coherent vision for the album right from the outset.

‘As much as we like the Flying Burrito Brothers and Sweetheart of the Rodeo, the English folk revival of the late ‘60s is just as important for us – Fairport Convention, Pentangle and John Renbourn’

Did you write any of the album in LA?

Sam: We wrote a lot of the parts there. One of the songs – Ruby Red – is based on me and Rich having a jam on a porch in Hollywood. I came up with a riff – we thought it was going to be an acoustic instrumental, but we started messing around with it in rehearsals and it sounded good when it was heavy and electric. Rich went away and wrote the melody and the words.

The House On The Hill is one of my favourite songs on the album. What can you tell me about that track? I love the twangy guitar riff and the Spaghetti Western vibe…

Richard: Our friend Christof [Certik], who is a bit of a LA/San Francisco legend, wrote that riff. The guys went out on the porch and drank beer and smoked weed, while I had to coach him for four hours. It was hard to get it out of him, but once he did it, it was incredible.

Sam: Like every brilliant guitarist, he’s a perfectionist, but we got there in the end.

Crippled Shining Blues is another highlight of the album. It was also featured on an EP with Oxford band The Dreaming Spires earlier this year…

Richard: I’m really pleased with the way that song came out – it was all done in Walthamstow.

Sam: Rich had the two-chord riff at the start and we just jammed over it and he came up with the guitar riff. There’s a lovely complementary pedal steel riff, too.

You’ve been recording your new album? How’s it going?

Richard: We’re almost done – we’re putting the finishing touches to it. We’ve got about 20 songs, we’ll whittle that down to about 11 and then we’ll see if it’s any good…

When do you hope to release it?

Richard: Only the gods know that. Everything is a bit up in the air regarding when the album’s coming out.  It’s a weird time – everything takes absolutely ages, because of bloody Record Store Day. We need to have our stuff out on vinyl. The people who buy our records like vinyl and it’s how we survive on the road – not by eating vinyl, but by selling it.

Sam: I think we started recording the new one before the last one was even out – we like to keep things ticking over. We’ve been busy this year.

What can we expect the new record to sound like?

Richard: I think we’ve found our feet to be honest. The first album was a bit of a stab in the dark and it was very much me, Paulie and Sam…

Sam: We were the genesis of it.

Richard: Even though I do like Genesis… We’ve taken shape as a live band, with Patrick and Joe on pedal steel. They’ve been very involved with the new album – Patrick’s been co-writing. It’s been much more of a collaborative effort. I do think that the new album is very different, but it’s very much in the same vein musically, I suppose. 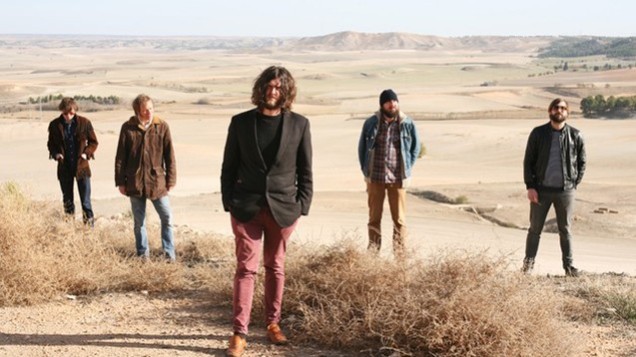 Sam: We’ve done all of it at Bark Studio in Walthamstow, which is where we did about a third of the first album. We’re working with Brian O’Shaughnessy – he’s fantastic. Me, Paulie and Rich live in Walthamstow.

It’s sounding really nice. We had the majority of the album – the core bits – done about nine months ago. We’ve spent the last few months sprinkling the fairy dust on it.  It’s been really nice to see how it’s come together.

Richard: A lot of the recording for the first album was done in LA and we did some overdubs in Nashville. This album has been purely E17, which has been great. Due to the way of the world, it’s so hard to get a two-week chunk of time for recording, so we do a weekend of basics and then we drop in with some other ideas. I’m so chuffed with some of the stuff that we’ve done for the new record. I think it’s bloody good and I really hope that people will be blown away by it.

If you’ll pardon the pun, Christmas is a good time for hanging stars… What are your plans for the festive season?

Sam: Our drummer will be on the other side of the world, but for New Year’s Eve we’ll probably be at the What’s Cookin’ night in Leytonstone, sinking in a Yuletide country vibe.

Richard: We’ll probably be getting slightly off our nuts in some way or another – we don’t mind that at all.

Over The Silvery Lake by The Hanging Stars is out now on The Great Pop Supplement/Crimson Crow.