It sounds like Lee Hazlewood fronting Spiritualized and when Say It With Garage Flowers first heard it, seven years ago, we said: “his atmospheric, late-night laments are steeped in Northern melancholy and laced with psychedelic effects and gorgeous string arrangements.”

We also compared his baritone voice to Scott Walker, Richard Hawley and Leonard Cohen, and named his haunting country-folk song Oslo as one of our favourite tracks of that year.

To celebrate this year’s vinyl release of Stations, we spoke to Nev about his memories of writing and recording his debut album, asked him about his misspent youth trawling Manchester record shops, and got the inside track on his next album – a collection of orchestral songs inspired by Scott 4.

How does it feel to have Stations out on vinyl?

Nev Cottee: It feels very good. I’m in-between albums at the moment – I’m in the process of finishing the next one – so it’s good to keep the momentum going and to keep things ticking over. It never came out on vinyl. For the first album, I wasn’t on Wonderfulsound – I did it off my own back, with a couple of actor mates, Jeff Hordley and Graeme Hawley, who, very generously, paid for some of the recording and for it to come out on CD and digitally. I wanted to get it out on vinyl eventually – it’s always nice to have it on a bit of plastic, with some lovely artwork. It was good timing with Record Store Day – it all came together.

Do you buy much vinyl?

NC: I used to – I buy the odd thing now and again. I dip my toe in. I did all my record buying as a youth. I used to spend an absolute fortune, when I had no money – we all did the same, didn’t we? Scouring the record shops of Manchester – that’s when I was really into it. Then I had to buy them all again on CD… Now I’m streaming and I think, ‘wow – I think I’ve bought this record three times now.’

I like to buy records at gigs – if I go to a gig and see a band I like, I’ll make a point of going to the merch stall. My vinyl days are done, but I DJ a lot and that’s when I get back into playing records – it’s a chance to dust off the collection. That’s when I’m thankful for my misspent youth. At home, I spin the odd record, but I listen to a lot of radio shows on my computer.

Do you have a favourite record shop?

NC: There are two in Manchester that I like – one is Vinyl Revival. It’s run by an old friend of mine, Colin White, and it’s been going for years. It’s a great shop – he’s a lovely guy and really knowledgeable. It’s great to go in, have a chat with him and see what he’s got.

I also like Piccadilly Records – I can remember when it used to be just off Market Street. They were friendlier in Piccadilly Records than they were in Eastern Bloc, where I had a bad experience with a condescending geezer behind the counter. I think everyone’s had an experience like that. I was only a kid – I was 14. He gave me grief for something I bought. I think my brother had recommended a band to me – it might have been The Inspiral Carpets, but I’m not sure. He took the mickey out of me – he was trying to be cool. When you went in Piccadilly there was a lovely, friendly vibe. 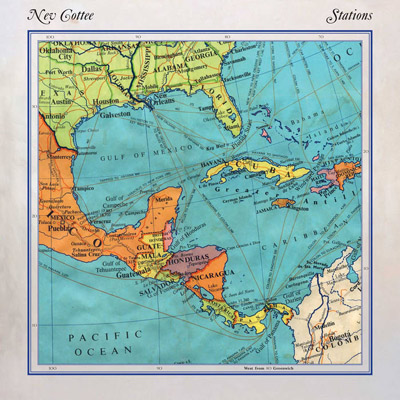 Stations was your solo debut. How do you feel about it now? Have you listened to it recently?

NC: I remember seeing George Harrison speaking on The Beatles Anthology documentary series – he said he’d not listened to Revolver since the day it came out. I thought, ‘bollocks – no way! Everyone listens to Revolver every day.’ I’m not comparing myself to George Harrison, but, in recent years, after releasing my own records, I’ve realised there’s no point listening to your own records, because all you hear are the mistakes and you think about the choices you should’ve made, but didn’t. It’s quite a frustrating experience – there’s not much pleasure to be gained from it. Plus the fact that while you’re making it, you’re listening to it continually for the whole process – mixing, mastering… Those songs become lodged in your brain. If you hear them out of context, like when you walk into a bar, it can be pleasurable. Saying that, I think Stations still stands up – it sounds pretty good and it’s quite lo-fi.

There are a few things I might have done differently, like made it a bit bigger production-wise, but maybe that’s its charm. It has almost a demo quality to it – we used a really basic drum machine on some of the tracks. Carwyn Ellis had a retro drum machine app on his phone. I like the feel of it. I wasn’t coming out all guns blazing – it’s a gentle introduction.

What are your memories of writing the songs and recording the album?

NC: Writing the songs was a long process – it’s the same with every band’s first album, isn’t it? They’ve had a collection of songs that they got together when they started the band and they build on that. The songs were from over a five-year period. You’re always trying to second guess the first album, saying it will be the best one ever, but as you move on and do the next album, you’re less questioning – you just get on and do it.

‘I lead quite a solitary existence, so lockdown wasn’t a great shock to me. I was keeping it real and I was very productive. I had my studio set up and I started writing a lot of songs’

Recording it was a very quick process – we did it in Carwyn’s house, in Cardiff – me, Carwyn and Mason Neely, who has produced all my albums. We were up early doors and we did it in five or six days. It was very intense and it was good – we worked hard at it, from nine in the morning to seven or eight at night, but we broke off for a cup of tea every now and again. Everyone was really productive and it was really enjoyable.

Do you have a favourite song from it?

NC: Oslo – it’s the one that really came together and it has some great bass playing from Mason, which elevated what was a folky, picking song to something completely different. When he threw that bassline down, it blew my mind and I saw where we could go. That’s the joy of working with top mates and musicians who come up with great ideas and take songs to the next level. It’s a great collaborative process.

Let’s talk about 2020. How were you during lockdown and the Covid-19 crisis?

NC: I was OK – I lead quite a solitary existence anyway, so it wasn’t a great shock to me. I was keeping it real and I was very productive. I was in Manchester – I had my studio set up and I started writing a lot of songs. For the first few weeks it was quite a novelty, but then you just have one of those days… you’ve not seen many people, or spoken to anyone. We’re social animals and we need interaction – even if it’s just a quick ‘hello’ on the street. It must’ve been terrible for some people.

What can you tell us about the next album?

NC: I’m finishing my new album. I’m hoping to get it done by the end of the year. It has the working title of Solitary Singer. I’ve been listening to a lot of Scott Walker – again. I’m putting strings on it – I’m going big and I’m hoping to go to Prague to work with an orchestra. I hope it will sound like Scott 4. You’ve got to aim high. Watch this space.

For my sins, I’ve also written another album – I’ve created a Lee Hazlewood alter ego and I’m channelling the whole Hazlewood vibe. I wanted to write 10 songs that could stand up in the Hazlewood oeuvre and I’m very excited by them.

Stations by Nev Cottee is out now on Wonderfulsound.