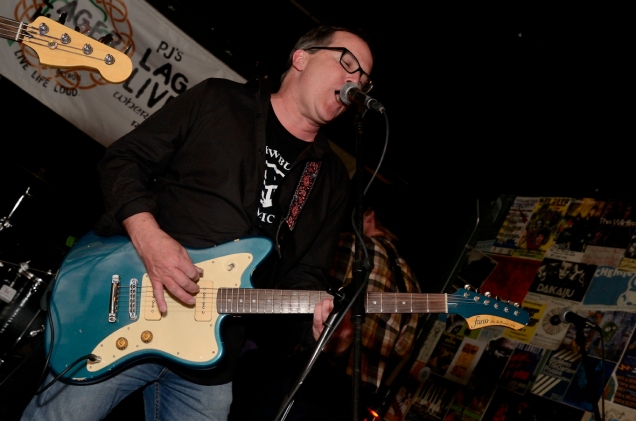 Nick Piunti has hit a power pop purple patch. Trust Your Instincts – the new album from the Detroit singer-songwriter – is his third long-player in just under four years and it doesn’t disappoint.

It picks up where his last record, 2015’s Beyond The Static, left off and it’s also a worthy companion piece to his 2013 classic – 13 In My Head – a firm favourite here at Say It With Garage Flowers.

I spoke to Nick to find out the story behind the writing and recording of Trust Your Instincts – an album that was made with the help of a kitchen table, coffee, wine, an iPhone and a trusty Fano JM6 guitar…

With the title track, which opens the album, we’re immediately plunged back into classic Piunti power pop territory. What can you tell us about that song and why did you decide to name the album after it?

Nick Piunti: The title track was written for my oldest daughter, who is 20 and was going through a tough time with her boyfriend – now ex-boyfriend.

Most of the songs on this album – if not all of them –  had the good fortune of the lyrics and the melodies coming at the same time. That’s not always the case. For me, if the lyrics come later, they sometimes never come at all.  I always end up with several unfinished songs because the lyrical inspiration wasn’t there in the first place.

When recording the song, Geoff Michael (producer) and I encouraged Donny Brown (drummer) to summon his inner Keith Moon. It took a little bit of prodding, but it paid off. The acoustic guitars also seem Who-like to me.The song really came together for me when Ryan Allen added his double tracked guitars. Ryan played guitar on five songs from the album. He came up with some great parts, as he always does, and it really propelled this song.

I had several working titles for the album, but Ryan suggested calling it Trust Your Instincts.  I initially didn’t want one of the song titles to also be the album title, for the reason of not wanting to bring too much attention to just one track, but the title definitely fits this album.

I pretty much do trust my instincts when making records and, as my wife would tell you (or is that I tell her?), I’m almost always right…

How did you approach this album from a writing and recording process? You used the same studio and core musicians as the last album, didn’t you?

NP: Yes – we used the same studio, Big Sky Recording in Ann Arbor, with Geoff Michael engineering and producing. Also Andy Reed recorded all of his bass parts at his studio, Reed Recording Company, and Donny Brown tracked his drums to Fade Out in his own studio.

We also did a few overdubs at both Andy’s and Donny’s. Ryan Allen recorded a few harmonies in his basement and David Feeny, who owns The Tempermill Studio, recorded the pedal steel parts on Dumb It Down at his great studio.

Rachael Davis, who sings the beautiful harmony vocal on Dumb It Down, recorded her part in Nashville. With today’s technology, it is so easy to just send tracks from one studio to another. It opens up some options and saves a lot of driving. But most of the sounds were recorded at Big Sky Recording in Ann Arbor, Michigan.

As far as writing the album, most of the songs either started, or finished, at my kitchen table. There’s something about that setting that works really well for me. In the morning, it’s me, with my acoustic guitar, coffee, and my iPhone to capture the ideas.

In the evening, I substitute the coffee with wine. My house is hardly ever empty, so somehow my family puts up with my process. They would probably rather have me in the basement, but I like the sunlight and the acoustics and I like them close by.

What were you listening to while you made the record? Did any of those influences filter through into the sound of Trust Your Instincts? What sound were you aiming for with this album?

I don’t ever try to make an album that is directly influenced by one band or sound.  The song usually dictates the direction. I do remember telling Geoff, after the album was recorded, to make it sound like Nada Surf, but I changed my mind afterwards, so we settled on making it sound like a Nick Piunti record.

One Hit Wonder is one of my favourite songs on the album – it has a slight Beatles-esque feel. The intro is a bit Dear Prudence/ psych – and the melody is great – very infectious. I also love the killer guitar solo.What was the inspiration behind it?

NP: Yeah – One Hit Wonder seemed like the obvious ‘single’ to me.  I originally wrote it with a simpler muted eighth note progression, but I thought it was too simple and obvious.  So I came up with the riff played through a pedal that emulates a Mellotron. That adds to The Beatles sound for sure.

The lyrics are about a relationship that was more about lust than love, but I used the musical reference of a one hit wonder to sum up the affair:  “We were a one hit wonder couldn’t follow it up”.  That kind of says it all.

And thanks, the guitar solo is one of mine. I usually hear the solo in my head then try to find the notes on the guitar. I used a Fano JM6 for a lot of the guitar parts on this album. It seems each album I make has one starring guitar. The verse melody evolved a bit and my phrasing reminded me of something that Mike Viola would do. I never intentionally try to write like one of my influences, but if it comes out that way innocently, then I’m fine with that. 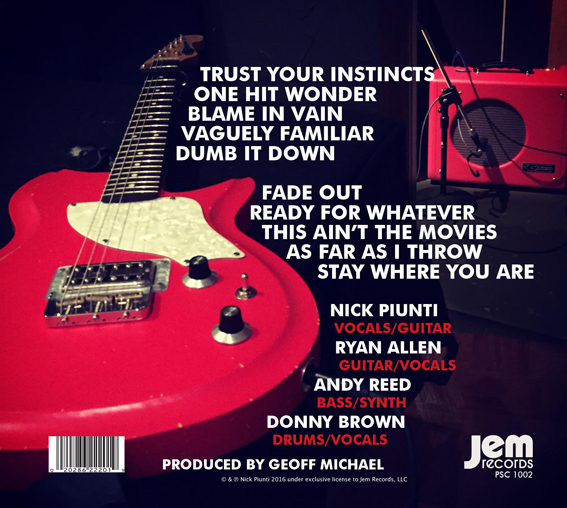 Dumb It Down is another highlight for me. It’s a gorgeous pop song. Where did it come from? It has a slight country feel in the latter part of the song, with some pedal steel…

NP: That song was a tough one to write, in the sense that it was very personal. The first line, “another day without fiction, I keep it to myself,” came to me after leaving a friend who was slowly succumbing to cancer.

His name was Merle, he was our band’s manager, when we were a bunch of snotty 12-year-olds, and he was really instrumental in my musical journey.

Though the song changes perspective, I felt like the verse was from Merle’s point of view and the chorus was mine, or any of his many friends that would miss him when he wouldn’t be around any longer. The second verse was about how our band Dwarf didn’t make it. Merle wanted to know that I was ok with all those years we put into the band.  I assured him that it wasn’t a waste of time at all. And that I would do it all again…

I know you like pedal steel, so I threw that in for you. David Feeny happens to play great pedal steel. He sent several tracks played through the entire song and Geoff and I picked the parts we liked the best. David recorded a really nice solo, but Geoff thought I should try something as well. And Geoff suggested a female voice in the chorus. The song came out prettier than I expected it to be, which balances out some of the more rocking moments.

There’s a song on the album called This Ain’t The Movies. What’s your favourite movie and who would you like to play you in the Nick Piunti biopic?

NP: My favourite movie? The easy answer would be The Godfather, but these days most of my movies are of the animated variety that my youngest daughter wants to see.

Comedies are easier for me to watch over and over again: Me Myself and Irene, Caddy Shack, Blazing Saddles, Animal House.

Who would play me in a movie?  My wife says George Clooney, but I’m not sure how George sings… If the movie was about a younger me, then there’s an actor named Logan Lerman who my wife says would be a good fit.

The final song on the album, Stay Where You Are, takes things down a notch – it has a more of an acoustic, mid-paced feel. What can you tell us about that song?

NP: Stay Where You Are is loosely based on a past relationship, where it’s obvious to one that the best days are behind them. It’s a simple chord progression, I have probably written this type of song many times before, but it really seems to connect with quite a few people.

It seemed to be the perfect closing song for the album. And I kept the album to ten songs, because I feel that’s enough. I would like for people to listen to the album in one sitting and 36 minutes seems like enough time to ask.

How’s the rest of the year shaping up for you? Knowing you, you’re probably working on your next album already… Can you give us any clues?

NP: The album has just been released on September 9 on Jem Records and I’ve been getting several songs played on The Loft Sirius XM radio, as well as countless smaller stations. WDET in Detroit has always been a great promoter of my music.

There are so many internet radio stations that play my music, from The Ice Cream Man Power Pop Show in Sweden, Jeff Shelton’s Power Pop Show in California, Alan Haber’s Pure Pop, Jim Prell, Howard Byrne, Pop That Goes Crunch, Craig Leve, Dave the Boogieman… so many guys that pour their hearts into promoting power pop for those of us that have never outgrown it. I can’t thank them enough, or the reviewers out there that really make my day when they post their articles. So, getting the music out there is a priority.

Playing live is awesome. It’s hard to do a lot of that, but there’s nothing else like it. I’m always writing, so there are new songs in the works, but I’m not rushing back into the studio yet. Three albums in four years took a lot of work. I may take a bit of a breather before the next one. Of course, I’ve said that before…

Nick Piunti’s new album, Trust Your Instincts, is available now on Jem Records. Its predecessor, Beyond The Static, has just been reissued on limited edition coloured vinyl by Sugarbush Records.