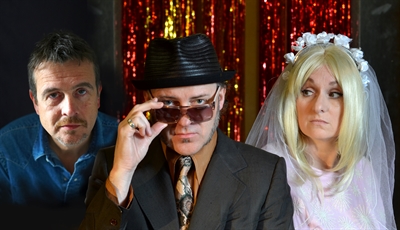 Husband and wife country music duo My Darling Clementine – Michael Weston King and Lou Dalgleish – have collaborated with best-selling crime writer Mark Billingham on a new album and live show called The Other Half.

Described as “a story of love, loss and murder told in words and music”, The Other Half  is set in a rundown Memphis bar, and centres on waitress Marcia – a former Las Vegas showgirl – and the tragic tales she encounters through her customers, who drown their sorrows in her work place.

Mark Billingham’s story was inspired by the songs of  My Darling Clementine – a band he discovered via this very blog, and then two new tracks were written as the project progressed.

The album features appearances by actor David Morrissey and musicians Graham Parker and The Brodsky Quartet.

Had you heard of Mark Billingham before you collaborated on The Other Half and were you a fan of crime fiction?

Michael Weston King: I had certainly heard of Mark, but not read any of his books. I hasten to add that this was no reflection on Mark, just that I am not really a reader of crime fiction.

I read a couple of Ian Rankin’s books a couple of years ago, but that was mainly because they referenced my dear old friend Jackie Leven.

I was also due to do a gig with Ian, so thought I had better swot up, but, apart from that, the last time I really read any crime was in my late teens and early twenties, when I was on a severe Elmore Leonard kick.

How did your collaboration with Mark come about?

MWK: Well, I actually suggested it to Mark. I can’t recall if it was Mark who told me about the playlist in the back of his book The Bones Beneath [which featured a song by My Darling Clementine], or whether it was a promoter and friend in Stoke, called Craig Pickering, but it was certainly Craig who asked me if we had any thoughts about collaborating in the same way that Jackie Leven and Ian Rankin had done a few years before.

Craig was also a huge fan of Jackie’s and often promoted me and him together in and around the Stoke area.  I forwarded that suggestion on to Mark and that got the ball rolling. He said yes and we pencilled in a few shows.

A few months later, Mark came back with this fabulous story. That was hugely exciting and also very interesting, as it breathed new life into the songs, giving them a location and names to some of the characters that frequented them.

How was the recording process for The Other Half album?

MWK: We cut the narration in London, everyone together around mics, reading and playing the parts. It was just like The Archers!

It was recorded at RNIB, where Mark records all his audio books, and it was done very quickly indeed – pretty much in one take.

Mark narrated and Lou, David Morrissey and Graham Parker all played various parts. My daughter, the actress Florence King, was also involved. She played two parts and it was a thrill to see her acting opposite someone of the stature of David Morrissey…. and very much holding her own.

After we had that down, I took the tapes up to Yellow Arch Studios in Sheffield, where we cut our second My Darling Clementine album The Reconciliation? – and worked with producer Colin Elliot and guitarist Shez Sheridan [from Richard Hawley’s band].

Given that the live show of The Other Half  is just Lou, Mark and I – so, consequently, the songs are performed in a stripped down way, we decided we would record them like that too for the album, and also, so as to offer different versions / arrangements of some of the older songs.

This approach made a greater focus on the lyrics too, as they are very much part of the story. Colin and I also worked on some sound effects for certain scenes, which was really enjoyable. Prog country? No, honestly, it’s not…

As a touring country band, how does it feel playing with Mark and being part of a show that involves spoken word, as well as music?

MWK: It takes a little adapting, as it is very different from the usual My Darling Clementine show. We are used to being the sole focus of the audience’s attention – we are the ones doing all the interaction with the crowd.

When we first started doing the show, Lou and I were to be found, sitting and listening to the narration, and then coming to the mic to perform the songs. We were not interacting verbally with the audience in the usual way, but now, we have adapted it into two 45-minute performances.

Mark sets the evening up, explains what is going to happen, and then introduces us. We come on and play three or four songs to get the party started, which allows plenty of time for Lou to bemoan that she is married to me, and then we go into The Other Half.

How would you describe The Other Half?

MWK: I don’t know if you are familiar with Terry Allen. He’s a great Texan renaissance man – a compadre of Townes Van Zandt and Guy Clark – and he’s a piano player, rather than a guitarist, but he’s right up there.

He is also a playwright, an artist and a sculptor, and has made some fabulous albums, a number of which are short stories set to music – check out Juarez. That is how I see The Other Half – as an album/concept in that vein.

We also had a quote after one show which described it as: “part gig / part play/part storytelling – albeit storytelling influenced by Jim Jarmusch”.

I rather liked that.

Do you have plans to collaborate with Mark on any other projects? How about writing some songs together? That would be great…

MWK: Well, we collaborated on a song for The Other Half, the closing track, As Precious As The Flame, which I am really delighted with. It may even make it on to the next My Darling Clementine album, with a full band arrangement.

We have got a lot of songs in our back catalogue, so if Mark feels inspired to write another story around a series of them, then we would be delighted. Also, as we write new songs, if we feel they could lend themselves to any other projects he is involved in, then all well and good.

When I wrote Friday Night At The Tulip Hotel [from The Other Half], I just wrote it as a new song – not even necessarily one for My Darling Clementine. But as soon as it was written, it felt like it could be right for this project, and Mark agreed, so in it went.

Lou and I feel there is more that could be done with The Other Half, in terms of a treatment for TV or film. I think it could be a really interesting TV drama, like a country Pennies From Heaven.

So, when we can expect a new My Darling Clementine album?

MWK: I think we have all the songs written for the next album. There’s a pretty good squad so far and we also have an idea of where, and with whom, we will record it. We’re just working on the finances right now.

We are quite prepared to wait until we have got what we need to do it, exactly how we want.

The next album is very important for My Darling Clementine – it’s almost make or break in a way, so it needs to be right and given every chance of being a game changer. Musically, it may well be a bit more soul than country, but it will still be very much a duets album.

Lou has written three or four fabulous songs for it so far, and I am very excited about hearing how they will turn out.

Finally, as we’re talking about music and fiction, what are you currently listening to and reading?

MWK: This is what I am listening to and reading right now:

MWK: I should also recommend something new: Pete Williams – Roughnecks and Roustabouts. I am also getting to grips with David Corley – Available Light. He’s an American singer songwriter in his late forties, who has just released his debut album.

Rhythm and the Blue – Jerry Wexler

MWK: And a fabulous book that I simply cannot put down called Time Of Death – by Mark Billingham!

To read an interview with the other half of  The Other Half, Mark Billingham, please click here.

For more information on The Other Half, My Darling Clementine and Mark Billingham, please visit: