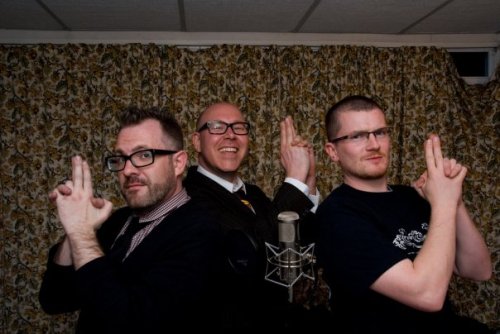 Earlier in the year, myself, Matt Hill and Will Dobson went into the studio to begin work on our James Bond song – a labour of love, some may say obsession, for all of us.

The original song started out as a lyric, written by me, written following a screening of Quantum of Solace. I loved the film (I saw it four times in the cinema!), but I felt let down by Jack White’s awful title song, so suggested to Matt that we could do better.

With a glass of red wine late one night, I penned the words – a few weeks later, Matt wrote the tune and recorded a rough acoustic demo. We then rewrote the song – changing the words, adding some more and writing an extra section, until we had a demo we were happy with.

I wanted to capture the feel of an old Bond song like Goldfinger, or From Russia With Love, but to also make it sound relevant to Daniel’s Craig’s new era of 007. I think my words mix the camp rhymes of say, Leslie Bricusse and Anthony Newley, but with a touch of darkness and revenge, inspired by the last two Bond films – so the song’s kind of retro modern, if that makes any sense.

Anyway.. keyboard boffin and producer, Will Dobson, came onboard to write an arrangement for horns, strings and piano. As I write this, the song is in the final stages of production, Will now having added bass, synths, drums, percussion and lots of other instrumentation to create an epic Bond masterpiece.

With vocals & guitar by Matt, it’s shaping up to be the best Bond song in years – a moody, contemporary sound, but with a big nod to the classic ’60s 007 hits we all know and love.

We’ll be releasing more information soon, but, just like the next Bond movie, the project is still a closely guarded secret.

One thing’s for certain- we will return.